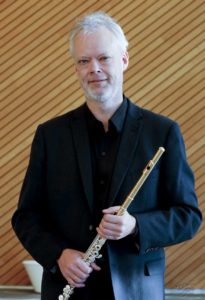 His special interest for flute ensembles and music for multiple flutes has led to numerous workshops in Europe and the US, and close collaboration with composers to expand the flute ensemble repertoire. The discography includes work-dedications by Trygve Madsen, Hans Magne Græsvold, UiA- colleagues Konrad Øhrn and Terje Mathisen, and Baroque concertos by Bach, Händel and Vivaldi.

Schau initiated the Norwegian Flute Society in 2009 and became the society`s first chair. He has been Artistic Director of the annual Norwegian Flute Festival since 2011.

He was co-managing the EEA/Norway Grant project Culture for integration- European Flute Forum 2013-2014. In 2014 he received the education-award at the University of Agder. In 2015 he co-founded the Council of European Flute Associations and has since then been a member of its steering-committee. http://flautists.eu/board/